Today's selection -- from Team Moon: How 400,000 People Landed Apollo 11 on the Moon by Catherine Thimmesh. With alarms sounding and fuel running out, Neil Armstrong came within seconds of crashing the Apollo 11 landing module:

"BAM! Suddenly, the master alarm in the lunar mod­ule rang out for attention with all the racket of a fire bell going off in a broom closet. 'Program alarm,' astronaut Neil Armstrong called out from the LM ('LEM') in a clipped but calm voice. 'It's a "twelve-oh-two."'

"Translation: We have a problem! What is it?

"Do we land? Do we abort? Are we in danger? Are we blowing up? Tell us what to do. Hurry!

"In Mission Control, the words TWELVE OH TWO tumbled out of the communications loop. The weight of the problem landed with a thud in the lap of twenty-six-year-old Steve Bales. Bales, call name GUIDO, was the mission con­troller for guidance and navigation.

"A moment earlier (after some worries with navigation problems), Bales had relaxed with a deep breath, thinking at last: We're going to make it. Now, wham! His mind, again sent rac­ing; his blood rushing; his heart fluttering; his breath -- still as stone. But he wasn't alone.

"A voice on another loop -- belonging to one of Bales's backroom support guys, twenty-four-year-old computer whiz kid Jack Garman -- burst in to make sure Bales was aware of the 1202. A quick glance at a master list told them a 1202 was executive overflow. Simply put, the computer had too much to do. But program alarms, as Garman knew firsthand, were built into the computer solely to test the software. By their very definition, they weren't alarms that should happen in flight. (During development, these alarms were testing computing cycles.)

"Yet there it was: 1202. An unreal reality. First, stunned inactivity at Steve Bales's console.

"Then, a bombardment of thoughts: What's the problem? Do they land? Do they abort? Are they in danger? Are they blowing up? Tell them what to do. Hurry!

"CapCom Charlie Duke (or Capsule Communicator, the voice link between Mission Control and the spacecraft) mused aloud: 'It's the same one we had [in the simulator].'

"And indeed, in one of the very last simulations, or practice sessions, before liftoff of Apollo 11, mission controllers found themselves stumped when faced with a sim­ilar program alarm. While training with the backup crew, SimSup Jay Honeycutt (or Simulation Supervisor) had asked software expert Jack Garman to concoct some sort of computer glitch for the controllers to solve. So Garman remembered the hidden software testing alarms and threw out one of those. It wasn't a 1202, but a similar type -- one that supposedly should never happen in actual flight (because the situ­ations that would trigger those alarms had presumably already been removed from the software).

"During that simulation, that test, GUIDO Steve Bales had called for an abort -- an immediate end to the landing. They stopped the pretend -- land on the moon. But it was the wrong call. While the computer was definitely having difficulties, it would still have been safe to continue the landing because the LM's criti­cal functions were still working.

"'And so [Flight Director] Gene Kranz, who's the real hero of that situation, sat us all down and said, "You WILL document every single program alarm, every single possible one that can happen" and what we should do about it if it happens,' recalled AGC Jack Garman, explaining how they ended up with a written record of those 'nonexistent' program alarms.

"Sometimes, after the bugs have all been removed during development, programmers might go back in and remove all their testing alarms. But often, it's considerably more efficient (and cheaper) to just leave them buried unseen, deep down in the software.

"'So I remember,' continued Jack Garman, 'going back to my little corner with my friends -- my col­leagues -- and we wrote them all down. Wrote them on a sheet of paper (twenty or thirty of these alarms that were not supposed to happen), taped this list to a piece of cardboard, and stuck it under­neath the Plexiglas on the console.'

"'Give us a reading on the 1202 program alarm,' said Armstrong from the lunar module as it contin­ued its rapid -- and very real -- descent to the moon.

"'he astronauts had no idea what these alarms were,' explained Garman. 'Absolutely no idea. These alarms were software development alarms. They'd never seen them. Never studied them. Never had them. No one in Mission Control knew what they were, not Kranz or anybody.'

"GUIDO Steve Bales determined the computer had not lost track of the LM's altitude or speed -- critical for avoiding a lunar crash -- and still had its guidance control, also essential. Flight Director Gene Kranz determined, with input from his controllers, that all other systems were functioning within acceptable parameters. AGC Jack Garman concluded that as long as the alarm didn't recur, they were okay.

"Garman prompted GUIDO Steve Bales, who gave the 'Go' to Flight Director Kranz, who in turn gave the command to CapCom Charlie Duke. CapCom relayed the message to Armstrong and Aldrin. 'We are Go on that alarm,' he told Neil and Buzz and the hundreds of others listening in on the loops. Not more than twenty seconds had passed from the time the 1202 was first called out.

"'Program alarm!' Buzz responded from the LM. 'Same one.'

"Garman clarified to Bales that as long as the alarm was not ,constant -- not continuous -- they were okay. The rest of Bales's information looked good. He told the Flight Director, 'We’re Go.' Kranz 'went around the horn' -- polling his controllers for their status reports -- they were all 'Go.' Kranz told his voice link to the astronauts, 'CapCom, we are Go for landing.'

"'When it occurred again a few minutes later,' Jack Garman recalled, 'a different alarm but it was the same type ... I remember distinctly yelling -- by this time yelling, you know, in the loop here -- 'SAME TYPE [in other words, Hang/ tight!] and he [GUIDO Steve Bales] yells 'SAME TYPE!’ I could hear my voice echoing. Then the CapCom says, 'SAME TYPE!' Boom, boom, boom, going up.'

"In hundreds of practice simulations, they would have landed by now. But Mission Control couldn't see the perilous crater and boulder field confronting Neil and Buzz. Those things, coupled with the distraction of the alarms, had slowed them down.

"More than eleven minutes had passed since they started down to the moon. There was only twelve minutes' worth of fuel in the descent stage." 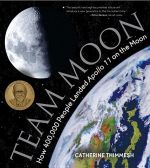