Today's selection -- from How to Write One Song by Jeff Tweedy. Musician Jeff Tweedy makes recommendations on how to come up with lyrics for a song:

"As I've said, the exercises I'm suggesting are all aimed at loosening up the habitual way we use language and the shortcuts we all take by rote when we converse and com­municate at our most basic level all day long, and then taking those new ways to think about language and turning them into the beginnings of lyrics, into the be­ginnings of songs.

"At a more basic level, avoiding adverbs and adjectives is just good all-around writing advice. You don't need to tell anyone 'the dog barked loudly.' Because adding 'loudly' to that sentence actually makes the word 'bark' quiet. Some of us repeat the same phrases to the point where our closest friends and family can often finish our sentences or even predict what we're about to say. I think we all do this to some degree because it makes commu­nication more efficient. It's much more important to be understood when asking 'Where is the fire extinguisher?' than it is to invent a beautiful and inspiring sentence: 'Tell me, won't you, how I may put my hand to the shiny red savior of our soon-to-be-ablaze breakfast nook?' Cliches can be helpful, sometimes even necessary. You might eventually be able to use them as larger building blocks of songs, which can be enlivened and twisted into more interesting shapes by placing them in fresher con­texts or even through repetition.

"But we're getting ahead of ourselves. Let's start with a few basic ingredients and see if we can make something exciting happen. An example to start ...

"Come up with ten verbs that are associated with, say, a physician, and write them down on a page. Then write down ten nouns that are within your field of vision.

"Now take a pencil and draw lines to connect nouns and verbs that don't normally work together. I like to use this exercise not so much to generate a set of lyrics but to remind myself of how much fun I can have with words when I'm not concerning myself with meaning or judg­ing my poetic abilities. Here's an example of a quick poem I might make trying to use all of the words above.

"OK. It isn't the greatest poem ever written. But I bet it's not the worst. It might be difficult to sing, and it might not make quite enough sense to follow, but al­ready I'm loving the way some of the scenes are being drawn--the phrase 'sunlight writes' makes me think of a hidden world, full of mystery and clues, and alludes to an idea that the natural world might have intentions, might be trying to tell us something ... Anyway, that's the exercise, and I find it almost always works when I'm feeling a need to break out of my normal, well-worn paths of language.

"While we're here, I might as well show you how I'd try to make the exercise into something more songlike. I can relax all the rules we just followed for now, and hopefully something that makes more sense will emerge. For this poem/lyric I can use whatever I want from the first-draft poem, but I'm not obligated to use every word from the original list. I'm not going to even hold myself to the nouns being nouns and the verbs being verbs.

"There. That's still a bit awkward, but it's definitely enough to jump-start my brain in a way where language and words have my full attention again. Which is the right mind-set to be in when you're creating lyrics, or at least fragments of lyrics." 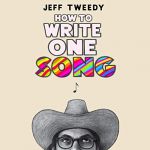