Today's encore selection -- from Making Habits, Breaking Habits by Jeremy Dean. All of us have a finite amount of self-control we can exert each day. Self-control is difficult and energy-depleting, and each time we exercise self-control during the course of a day, we have less remaining for later in that day -- making us more susceptible to those habits we are trying to change: 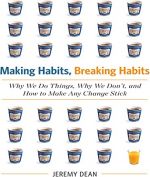